Video game productions differ heavily in team size, budget, channels of distribution, involvement of publishers and other factors and are therefore difficult to put into categories that cover the complete video game industry. Nonetheless it is necessary to make a reasonable categorisation in order to be able to conduct a meaningful data analysis. For this study, four categories were defined:

This categorisation cannot represent all possible types of game productions. Participants were asked to resemble the last project they worked on to the category that fits the most.

For the purpose of homogenous data, participants were asked to only count composers, sound designers, audio directors and audio programmers to the audio team and not external people like live musicians, voice artists etc.
For casual, indie and smaller budget games, the core audio team mainly consists of 1 to 3 people. Teams in big budget productions can differ in size tremendously. Teams of 4 to 12 people are not unusual. 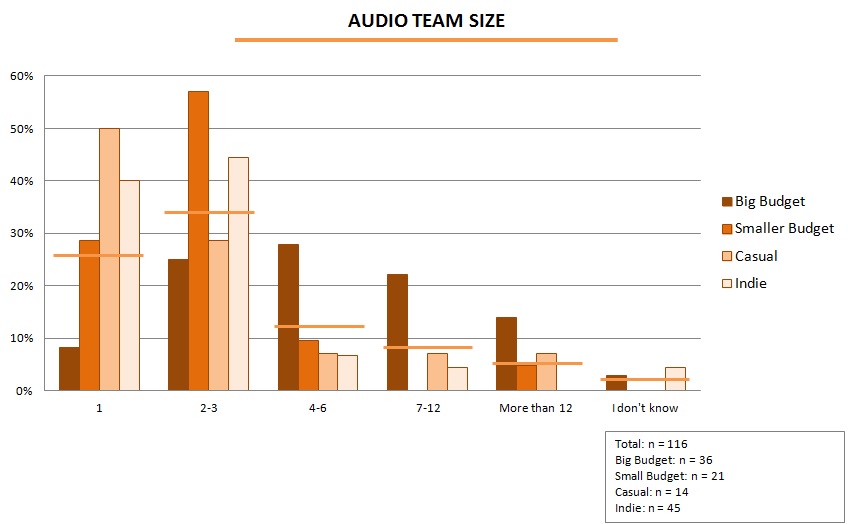 In 50% of the big budget productions, the participants worked more than 12 months on the project. Audio production for casual and indie games usually took less than 3 months.

COMMUNICATION (visible in full report only)

For insights on communication standards with clients, please request your free PDF copy of the full report now by contacting me directly via yannick[at]gameaudioindustry.com.

GAME MUSIC OUTSIDE THE GAME (visible in full report only)

For insights on how video game music is used outside the game, please request your free PDF copy of the full report now by contacting me directly via yannick[at]gameaudioindustry.com.

For insights on the business practice of speculative demos, please request your free PDF copy of the full report now by contacting me directly via yannick[at]gameaudioindustry.com.

For the last project they worked on, 62% of the pure freelancers worked with a studio based in the same country they live in. 25% of the participants worked with a developer based in another country. 12% could not give a clear answer, for example when the developers were located in different countries without a joint office. Possible reasons for the preference of working with a studio from their home country might be better local networks, no language barriers, or simply personal preference. These reasons should be subject of future research.

For most casual and indie games the music was done by the composer alone, either with samples only or with self-played and self-recorded instruments. 70% of the big budget productions had at least some of their music recorded live by hired musicians.

The most named places for live orchestra recordings were Budapest (Hungary) (5x), London (United Kingdom) (3x) and Sofia (Bulgaria) (2x). Because of the low number of responses, this has only very limited informative value.